AN AUDACIOUS FAITH IN FAIR HOUSING

Last month, Habitat Chicago staff honored MLK Day by volunteering on our construction site in West Pullman. Habitat staff used this day as an opportunity not only to serve, but also to learn about Martin Luther King Jr.’s efforts to end housing discrimination in Chicago, efforts that grabbed national attention and would play a pivotal role in the passage of the Fair Housing Act.

While the city of Chicago has a rich history, its status as one of the most racially segregated cities in the United States cannot be ignored. For decades in the 20th century, legal, discriminatory practices such as blockbusting, redlining, and racial restrictive covenants prevented black families from purchasing homes in white, middle-class neighborhoods and forced black families into enclaves that, compared to all-white neighborhoods, saw serious disinvestment. This was a significant repression as the quality of one's housing and neighborhood conditions is inextricably linked with economic and educational advancement.

Following the passage of the 1964 Civil Rights Act and the 1965 Voting Rights Act, MLK sought to expand the civil rights movement to the north and moved into a two-bedroom flat in North Lawndale to take on Chicago's pressing housing discrimination. Alongside local Chicago activists and the Southern Christian Leadership Conference, he began the Chicago Freedom Movement.

>>Staging frequent marches into all-white neighborhoods on the South and West sides.

At a 1966 march in the then all-white Marquette Park neighborhood, some residents reacted violently to the peaceful march, throwing rocks and glass bottles, one of which hit MLK. This brought national attention to the Freedom Movement’s campaign and national criticism of Chicago's discrimatory policies, which resulted in a series of meetings between Mayor Richard J. Daley’s staff, Chicago housing authorities, and the leaders of the Freedom Movement.

Together, they drew up the Summit Agreement, which included “immediate, practical, and effective steps to create a fair housing market in the metropolitan Chicago." These steps included the Chicago Housing Authority's promise to build limited-height public housing and the Mortgage Bankers Association's promise to make mortgages available regardless of a buyer's race. MLK referenced the agreement as a victory, but recognized it as "the first step in a 1,000-mile journey."

While the Summit Agreement went largely unenforced by Chicago's housing leaders, the attention gathered by the Freedom Movement was fundamental in the Congressional passage of the Fair Housing Act in 1968. The Fair Housing Act banned a person from refusing to sell or rent a property to any other person based on his or her race, color, religion, or national origin.

The passage of the Fair Housing Act was monumental in the fight for racial equality, but the impact of racial housing discrimination and segregation can still be seen in Chicago today. According to a 2017 report by UIC’s Institute for Research on Race & Public Policy,

>> The white-black homeownership gap in the Chicago metro area sits at nearly 2:1.

>> When applying for conventional loans in the Chicago metro area, whites have a 77% approval rate and blacks have a 59% approval rate.

>> In Chicago, white home-seekers are approved for $12.4 billion in total annual mortgages compared to $569 million for black-home seekers.

When MLK accepted his Nobel Peace Prize in 1964, he accepted it with an “abiding faith in America and an audacious faith in the future of mankind.”

Habitat Chicago’s audacious faith is that together we can bring an end to housing inequality and that everyone will one day have a decent home from which they can build a strong future.

What is your audacious faith? 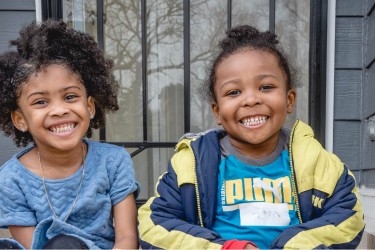 A GREATER RETURN ON INVESTMENT

While most of us may not take conscious stock of the effects of living in healthy or developed communities, there are many. They are the type that reverberate indefinitely, resulting in a multiplication of benefits whose value far outstrips the hard costs that initiate them. 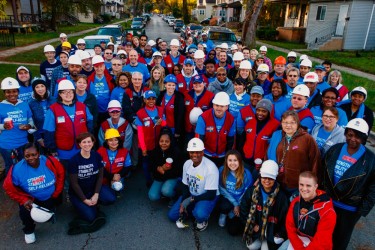 The neighborhoods in which we work already have many assets in place. Our goal is to highlight and amplify them with complementary projects, increasing market and social confidence both in residents and the city at large.
More Stories
LIFECYCLE OF A RESTORE DONATION
April 2022
EXCEPTIONAL WOMEN BUILDERS
March 2022
HABITAT CHICAGO RECEIVES $2.5 MILLION GIFT FROM MACKENZIE SCOTT
March 2022
IMPACT: ACCOMPLISHMENTS, PRIORITIES, AND GOALS
March 2022
HIGHLIGHTING GREATER GRAND CROSSING
November 2021