A few weeks ago, Shuanta Sampson finally accomplished what she had set out to do over 12 months ago. She packed all of her belongings into a few small suitcases, she gathered her three children to make sure they were ready, she took a deep breath and she shut the door on her old life of inadequate living conditions and temperamental rent prices. On November 8th, Shuanta became a homeowner.

The road that led her to this moment was not an easy one. Over the last year Shuanta has put in hundreds of hours attending homeownership classes and building her house in West Pullman from the ground up, all while working a full-time job and raising three kids. Like any adventure, there were high-points and there were low-points, but the culminating result of this journey was a safe, secure and affordable home to call her own.

If you missed it last month, Shuanta celebrated her home dedication with a smattering of friends and family, neighborhood business owners and church groups, and countless volunteers who worked tirelessly to make this day a reality. Among the crowd was Pastor Apostle Outlaw and Exelon Foundation President Steve Solomon.

Pastor Outlaw praised all of the hard work Shuanta had accomplished, thanked the entire neighborhood for being so welcoming and finished her speech with a blessing of the house and family. Shuanta was presented with an engraved hammer and bible to commemorate the joyous occasion. 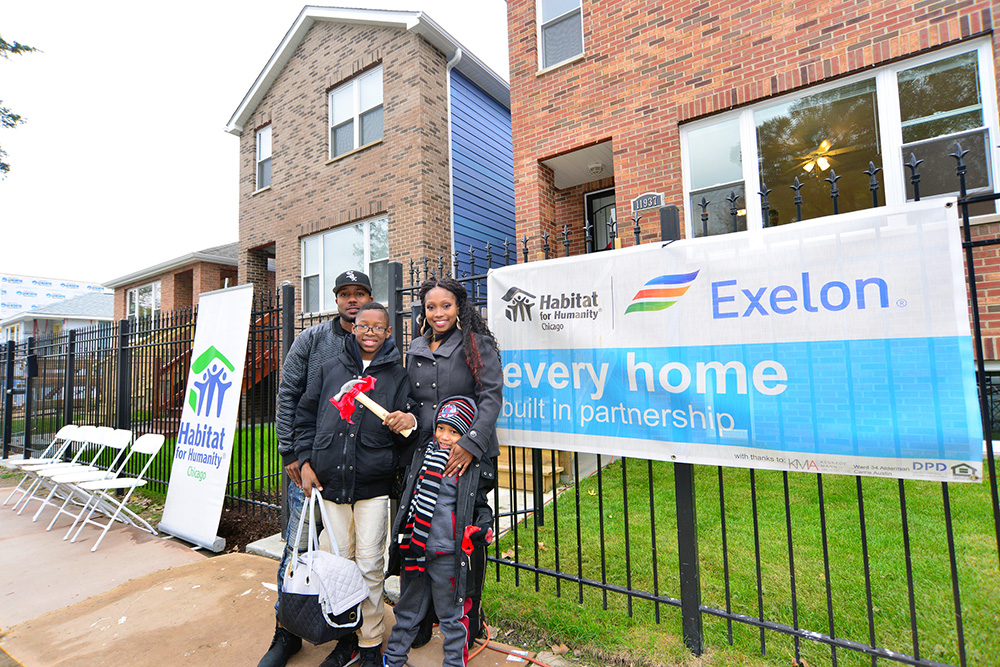 Next to speak was Steve Solomon. For the past several years Exelon has worked with Habitat Chicago to make a meaningful difference in people’s lives all around the city. This is the second house out of three that Exelon is funding in West Pullman. Even with the cold weather that was starting to blow in, the crowd was warmed to the core when Steve Solomon hugged and handed over the keys to Shuanta.

As the crowd began to disperse, Shuanta continued to beam. Photographs were taken, lunch was served and kind words were shared among old friends, new neighbors and even complete strangers. All in all, it had been a good day.

On November 8th, 2017, less than two weeks after the dedication, Shuanta Sampson closed on her new home. Shuanta is now the proud owner of her very own house, where her family doesn’t have to worry about health risks, safety concerns or fluctuating rental prices. Her kids go to school nearby and her mother will be moving in right next door. Shuanta continues to work a full-time job and has started making payments on her 30-year, interest-free mortgage. She has not only secured a decent place to live for herself, but for her children and her children’s children. Truly, her journey has just begun.

"Once the 30-year mortgage is over, I can leave the home behind to my kids and my grandkids. You never know what the future will bring, but now I know they'll always have a home to go to."

We would like to thank everyone that played a part in making this dream a reality. Exelon has turned into an invaluable partner and we could not have made any of this possible without them. We owe a big thank you to companies including Whirlpool and Homeowners Bargain Outlet, whose sponsorship and in-kind donations have made numerous lives in Chicago undeniably better. Most of all we would like to thank you for your continued support and commitment to the mission of Habitat Chicago. Together, we can create a world where everyone has a decent place to live.