THE WALLS THAT TECH RAISED

The House that Tech Built, Meet our homebuyers, Volunteers

On a warm and sunny June day, Habitat Chicago homebuyer Lybia raised the walls of her home during the second annual House that Tech Built Wall-Raising Day. Alongside four of her future neighbors and representatives from four of the Chicago tech companies working together to build and fund her home, Lybia saw the home of her dreams begin to come to life.

For years, Lybia had dreamed of becoming a homeowner. She craved a space to truly call her own and a home of which she could be proud, but a voice inside her head kept telling her “there was no point.” Her children were fully grown and live on their own, if she were to buy a house, it would be for her and her alone. Could she really do something like that for just herself?

Lybia made up her mind. She woke up one day in her rental apartment and realized that she had spent decades in service to others, both as a mother of three sons and as a special education classroom assistant, and the voice in her head was wrong, she does deserve it. Lybia came to the conclusion that she, and all the other women like her who dedicate so much of themselves to others, deserved to feel pride and happiness and comfort of her own. Lybia decided to act, immediately applying to Habitat Chicago’s Affordable Homeownership Program.

On Saturday, June 22nd, just a few months after she was accepted into the program, she raised the second-story walls of her very own home.

This ceremonial wall-raising day was Lybia’s first time really digging into construction work. She had already spent many hours on the build site completing her required volunteer hours, but had not yet faced a task as tough as building and raising walls. At first she was nervous about how the day would go, another nagging voice telling her that the work would be too hard and that too many eyes would be on her. When the day finally arrived and she reached the build site, however, her fear quickly dissipated. How could she possibly be scared when all these people, her future neighbors and a dozen caring individuals from Cisco, Lasalle Solutions, IPC, and Google, had all gathered to work on her future home and show their commitment to her future?

As the walls went up, Lybia began to visualize each room in her house. Where was she going to place her furniture? How would she decorate the walls? How would she make this place the comfortable, inviting space that she had dreamed of for years? Finally that voice, that insecurity, was quiet, replaced by confidence in her decisions and aspirations for her future. In a few short months she will have her own comfortable, affordable place to call home.

Looking back at the day, Lybia was particularly struck by the fact that these volunteers, from companies whose products and services she uses every day, have continued to invest their time and resources in helping her actualize her dreams. Watching the development of her home spring from the generosity of so many strangers was heartening for Lybia, and she left the day feeling “inspired, grateful, and eager to begin the next chapter of [her] life” in her brand new home in the West Pullman neighborhood.

Check out the pictures from the Wall-Raising day and please consider a donation to help more Chicagoans like Lybia know the peace and pride of affordable homeownership. 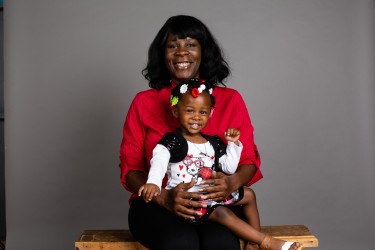 Lybia is a compassionate special education classroom assistant who enjoys baking, traveling, eating, reading, listening to music, taking photographs, and, above all, spending time with family and friends. 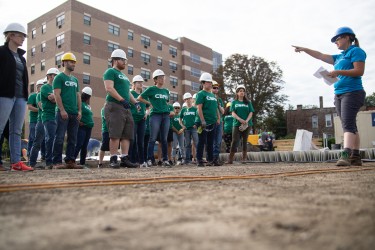