NADJIA REFLECTS ON HER HOMEOWNERSHIP JOURNEY

Earlier this month, Nadjia H celebrated the culmination of her time in the Affordable Homeownership Program by joining 150 Habitat Chicago supporters at her Home Dedication Ceremony in West Pullman. Reflecting on her experiences in the program, Nadjia shared with us the lessons she learned along the way and the hopes she has for her future as a Habitat Chicago homeowner.

Nadjia learned about the affordable homeownership program as a volunteer at Women Build in 2017.

Nadjia discovered Habitat Chicago’s Affordable Homeownership Program as a volunteer during Women Build in 2017. At the end of her build day, Nadjia remarked, “Oh, I’d love to own one of these homes!” and was overheard by Takiera, a Habitat homeowner who was also volunteering that day. Takiera immediately encouraged Nadjia to apply, walking her through the program requirements and the benefits of an affordable mortgage. Owning a home had long been a goal for Nadjia, who wanted to provide a stable space for her daughter, Nahla, and nephew, Isaiah, to thrive. Even before Nahla and Isaiah were a part of her life, Nadjia had a “vision board” that featured her dream of owning a new home with all brand new furniture and appliances. So, after hearing about the program from Takiera, Nadjia knew this was an opportunity she could not pass up.

Her time in the program required organization, diligence, and creativity.

The biggest challenge Nadjia faced during her time in the program was completing her volunteer and education hours. As a single mother working full-time as a mental health instructor, it often seemed like there were not enough hours in the day. But Nadjia found a way - she organized a calendar, managed her time efficiently, and often brought Nahla and Isaiah along to her education classes at the Habitat office. The two kids passed the time by playing games and coloring pictures of one of their favorite Disney characters, Moana. “Moana will definitely be a featured decoration in Nahla’s new bedroom,” said Nadjia with a smile.

Despite the physical demands of the days on the build site, Nadjia found the tasks rewarding and the time with volunteers uplifting.

When asked what her favorite part about volunteering on-site was, Nadjia immediately responded “the people.” She complimented the Habitat Chicago construction staff, stating, “You truly have good people working for you guys.” Referring to both construction staff and volunteers, Nadjia also expressed that she’d never met as many positive people as she did on the build site. Reflecting on the whole process of constructing her home, Nadjia was in awe of how many volunteers helped build her home and how fiercely they supported her dream, no matter the day’s tasks or weather conditions.

Nadjia also found great joy in going through the program with a cohort of her future neighbors.

According to Nadjia, it was a pleasure getting to know her future neighbors, and it was the cohort experience that “made the program fun.” She became close with her fellow cohort members, Tabitha and Erika, and shared that they were extremely supportive of each other throughout the process. These three women were always checking in on each other and offering words of encouragement if they were struggling. With their shared Home Dedication Ceremony drawing closer, Nadjia made it a special point to do whatever she could to help Erika, who had a new baby on the way, complete the program requirements.

In one word, the thing Nadjia is most looking forward to in her new home is “space.”

As her completion of the program drew closer and closer, Nadjia said her current apartment grew smaller and smaller. “We all just really need our own space. It’s so important for Nahla and Isaiah to have their own rooms as they get older, and for me to have my own space to relax, too.” On top of being a devoted parent and holding down a demanding job teaching children with special needs, Nadjia makes time to write music and paint. She plans to convert the basement into a “Girls Club” that will serve as an art studio, where she can peacefully work on her music and portraits. She’s currently at work on a series of portraits of “women with big hair” and plans to decorate the walls of her home with her original paintings. When Nadjia was a child, her mom painted a mural in her room and Nadjia plans to continue the tradition by creating a Lion King mural in Nahla’s bedroom.

Nadjia’s time in the Affordable Homeownership Program started and ended at an orientation session. On May 16th, Nadjia officially completed her volunteer hours by participating in two events at the Habitat Chicago office: a welcome session for the newest cohort of Habitat homebuyers and an orientation session for potential applicants to the program. At the welcome session, Nadjia emphasized that despite the challenges, there was never any doubt that establishing a healthy home for Nahla and Isaiah would make it all worthwhile. She also expressed that despite how challenging the last two years may have felt, the Habitat community grounded her and gave her hope. At the orientation session, Nadjia welcomed attendees with a friendly face and veteran confidence. She shared her story with the audience of nearly fifty, and even stayed beyond her required hours to answer questions and encourage potential applicants to just “go for it.” She made such a strong impact that many applicants said Nadjia was the final push they needed to take the plunge and schedule a 1-on-1 consultation.

Nadjia would like to say thanks to everyone who helped make her home a reality.

“We are so happy for this opportunity to have our own home. We want to say thank you. My daughter wanted me to thank you for turning the ‘hole in the ground’ into an ‘amazing home.’”

In case we missed you on April 6th, check out the photos from Nadjia and Erika's Home Dedication Ceremony. 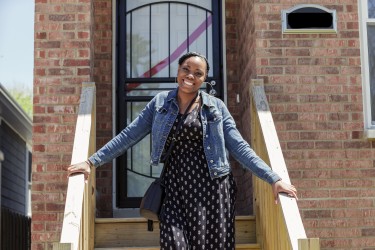