Women and Homeownership: The Hurdles and Why We Must Overcome Them

Our sixth annual Women Build has kicked off with full force. 300 women have been working hard all summer long to begin funding the home of a female Habitat Chicago homebuyer and are now gearing up to hit the build site in October to advance construction on five homes that will be women-owned. Their motivation? Helping their fellow women overcome the considerable hurdles women alone face in becoming homeowners.

The benefits of stable, affordable homeownership are immense and cannot be overstated.

Homeownership improves school performance, decreases crime, and enhances the health and well-being of children, as well as adults. For example:

o People who own affordable homes are found to have more discretionary income to buy health insurance, pay down debt, save for education, or start a business.

o All other things being equal, children of homeowners do better in school and have lower crime and drug usage rates.

The reality: it is harder for single women to become homeowners than their male counterparts. Here are some of the reasons why:

>>Women earn less than men, yet have increased care responsibilities.

o On average, women earn less than men working in year-round, full-time positions in Illinois (79 cents on the dollar and even lower for women of color) and as a result do not have the same access to credit and loans. This gap results in fewer means for women to acquire quality homes in stable neighborhoods.

o 8.6 million American households are headed by single mothers, while only 2.6 million are headed by single fathers. Similarly, women are significantly more likely to be the sole caretaker for an elderly parent or another adult. These uneven caregiving responsibilities prevent women from equally investing their time and financial resources into homeownership.

o Due to factors like the gender pay gap, women tend to have higher debt-to-income ratios and worse credit profiles. Since typical lenders do not consider any offsetting factors, single women are consistently denied mortgages at higher rates than single men, even though women are more reliable when it comes to paying their mortgages.

o When single women are awarded mortgages, they face significantly higher interest rates than single men because of their weaker credit profiles and are more likely to be given a subprime loan.

o Nationwide, the values of homes owned by women have appreciated slower over 15 years of ownership than those owned by men. According to a recent real estate study by ATTOM Data Solutions, homes of single women have increased in value by 31%, while those of single men have increased by 33%, further perpetuating the cycle of gendered wealth inequality.

>>It’s even harder for minority women.

o Due to discriminatory policies such as redlining and predatory practices like contracts for deed, black women have disproportionately been shut out of the wealth-growing opportunity of homeownership.

o It is also more challenging for black women to improve their credit enough to purchase a home, as they less frequently benefit from intergenerational wealth transfers, such as parents paying for college tuition.

o Black women have the highest rate of growth in college enrollment of all groups, an important and impressive advancement. However, they also have the highest level of student debt, further increasing their debt-to-income ratio and worsening their credit characteristics. Older, single black women with a college degree have an average of $11,000 in wealth, compared to the $384,000 of their white counterparts.

Women Builders not only raise awareness, they change real lives.

Darlene Duke, our most recent Women Build homeowner, raised her daughters, Toya and Shuanta, as a single mother. When Toya was in college and Shuanta was just in junior high, the three women faced an unfathomable challenge – Toya was diagnosed with chronic Lupus. Although some cases of Lupus can be moderate, Toya’s was not. At the height of her flares, the pain was so unbearable she couldn’t move and Toya’s doctors prepared the women for the worst.

No one watching Darlene could be unmoved during this time. She forged ahead, working full-time to cover Toya’s escalating medical bills, caring for young Shuanta at home, and spending hours on end in the hospital with Toya, doing everything she could to keep her daughter’s spirits high.

After a long and arduous battle, Toya’s platelet count rose, her pain began to ease, and she was emitted from the hospital. She had beaten the worst of her Lupus. Now, 15 years later, Toya is a proud mother and Darlene and Shuanta are both Habitat Chicago homeowners.

Darlene reflected on her journey to homeownership,

“I did this for Toya, so that if the Lupus ever gets that bad again, Toya will have a comfortable place to go. We’ll have the space where I can watch her and take care of her. I can’t believe this peace – it’s a great feeling. Owning my own home means so much to me. We’ve worked hard to get to this point. We’ve come so far. I deserve this. All us women deserve this.”

This matters for people of all genders.

Given that single women make up 17% of all home purchases, double the rate of single men, the housing market as a whole suffers when single female buyers are locked out. You can make real change for local women by donating to help the Women Build community hit their $175,000 goal by October 13th. 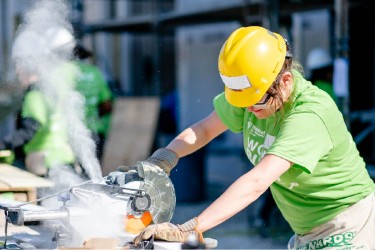