From August 27th - 31st, hundreds of volunteers gathered together to join the 35th Jimmy and Rosalynn Carter Work Project in St. Joseph County, Indiana. Together, these volunteers worked alongside future homebuyers to make substantial progress on 41 homes being built by Habitat for Humanity of St. Joseph County.

When former President Jimmy Carter and former First Lady Rosalynn Carter first began this project, they did not anticipate that it would turn into an annual event with global reach. Yet 35 years later, this project has engaged over 100,000 volunteers in 14 different countries.

From India to Indiana, the reach of the Carter Work Project has spread far and wide since its inception in 1984. The annual event is a week-long building extravaganza organized by Habitat for Humanity International and local affiliates. The location of the build changes each year, typically alternating between national and international locations.

Since the beginning of their involvement with Habitat in Americus, Georgia, the Carters have partnered with Habitat in many ways, including fundraising, building, and advocating for the improvement of communities and human rights around the world.

Two of our very own Habitat Chicago Board members, Jeff Jozwiak and Daniel Marszalek, along with Construction Committee chair, Matt Neenan, and staff member, Kelly Scocchera, traveled to St. Joseph for a day to join the build. Jozwiak and Neenan are both leaders at Norcon, Inc., a Chicago based construction firm and generous Habitat Chicago home sponsor. Marszalek is a managing director at BMO Harris Bank, a committed Habitat Chicago mission partner and build sponsor. Together, the team of four worked on home #18, installing siding and framing the porch roofs.

At 94 and 91 years old, Jimmy and Rosalynn Carter are not planning on stopping anytime soon. Just hours after this year's event ended, the former President and First Lady announced that next year, the 2019 Carter Works Project will be taking place in Nashville, Tennessee. 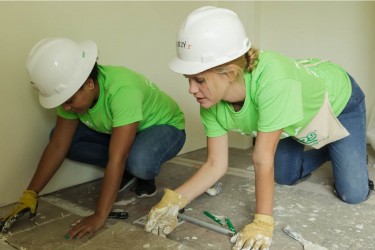 Our volunteers join us for all kinds of reasons: to give back to the city they love, to build a sense of comradery on their corporate team, to learn new skills and meet new friends, or simply to spend a little more time outdoors.
More Stories
HIGHLIGHTING GREATER GRAND CROSSING
November 2021
COST OF HOME: HOW TO ADVOCATE FOR AFFORDABLE HOMEOWNERSHIP
July 2021
OUR TOP READS FOR SUMMER 2021
May 2021
NOW RECRUITING: WOMEN BUILD 2021 TEAM LEADERS
April 2021
VOLUNTEER SCAVENGER HUNT CHALLENGE!
April 2021