BLOOMING WHERE WE ARE PLANTED

The current cohort of buyers in Habitat Chicago’s Affordable Homeownership Program recently participated in a community building class at the Kroc Center in West Pullman. Among the guest speakers were Natasha and Shomari, Habitat homeowners since 2015 and founders of the We Sow We Grow Project, an urban farm within Habitat Chicago’s West Pullman development. The two talked about their urban farm project, the neighborhood's growth since being in the program, and being a community resource for the new homebuyers.

What inspired you to start the farm?

We looked out from our future home while we were building and saw an empty lot across the street full of potential.  We were determined to physically change the corner where we lived. We wanted to get to know our community while building on the foundation that we had with the purchase of our home.

How does the farm benefit the community? Why is it important to continue to invest in its future?

It's incredible the amount of positive feedback we've received.  One of the things we'd noticed when we first moved in was the amount of foot traffic, but no one would ever speak to one another.  Once we started the farm, we've gotten to meet many of our neighbors.  We have gathered volunteers.  We have encouraged others to start or restart their own backyard gardens.  We have taken a dilapidated patch of land and transformed it into a useful, functional, source of beautification.

Describe your daily efforts to keep up the farm.

Working the farm is an additional full-time job.  It requires constant dedication.  So much so that, while I'm not proud to admit it, by the time the first cold front comes around, we're relieved.  The daily efforts change depending on the time of year.  For example, from February to April we are buying seeds, creating starter soil, soil blocks, and starting our seeds. May to September, we're tilling the soil, weeding garden beds, refreshing soil, laying down mulch, planting direct sow varieties, transplanting starters, performing pest control, promoting pollinator health, etc.  If it's September through November, we're planting greens, pulling the last of the harvest, de-weeding, prepping beds for next season, prepping soil for next season, looking over what worked well and didn't this season, planning for next season, general care, and cleanup sprinkled in.

Who else has been involved in your project?

We have neighbors from West Pullman assisting.  We have several Habitat Chicago [Homeowners] as well as longtime residents who loved seeing what we were doing and have been consistent in their volunteering, assistance, and encouragement.

If you were to describe what your farm means to you in 2-3 sentences, what would they be?

The farm is an extension of our commitment to blooming where we are planted. We want to show that we don't need to go outside of West Pullman for everything, no matter how much redlining, or redistricting, happened or happens within Chicago. Good things grow in Chicago and this farm right now is fertile ground.

What is your favorite thing to grow? Why?

I happen to love growing anything that vines. Anything in the cucurbit family - cucumbers, watermelon, gourds, etc. It's amazing to me that 50 lb watermelons can grow from one seed. It's also amazing that the bounty that comes from those single planted seeds tastes so dang good when it's harvest time.

What role, if any, did Habitat Chicago and the Neighborhood Grants Initiative play in developing your farm?

In order to get an urban farm off the ground, it takes a lot of hard work, volunteer dedication, and donations.  While we were in our infancy, Habitat Chicago was able to steer us to some grants that tremendously assisted in our sustainability.  The Neighborhood Grant specifically helped us gather materials we needed to close out our growing season and prep the raised beds and land for the next growing season.  Without these funds, we would have been starting the season attempting to do the work that should have been done the season before.  This leads to late sowing and a less than ideal harvest.

How did participating in the Neighborhood Grants Initiative foster connections with other members of West Pullman?

It was incredibly good to see that our neighbors were interested in ideas to build our community up.  At times it can feel as though you're on an island, but seeing our neighbors at the workshop really encouraged us to keep up our efforts.  We are building our community together.

What do you hope that the farm can be for future Habitat Homeowners?

We're hoping that the farm becomes a gathering space for those in West Pullman, and a source for fresh produce for restaurants that will open in the corridor in the future. We want to be a space where people in the community come to learn about starting their own backyard gardens, and a place to inspire young people to begin careers in agriculture. We're also looking to eliminate the feeling of being in a food desert, and a space full of empty lots and no beauty. All you need is a seed planted, and for that idea to be nurtured for it to become a full-blown resource.

Natasha and Shomari have put endless time, effort, and passion into their urban farm, and Habitat Chicago has been proud to support them and see their initiative grow over the years. Alongside fellow Habitat homeowners and other West Pullman community members, they’ve cultivated relationships around a common goal, sharing knowledge and resources to benefit their whole community.

At Habitat Chicago we aim to support more projects like this through our Neighborhood Grants Initiative, which provides small grants for resident-led projects in our focus neighborhoods. We know that it’s important to strengthen the real estate market and support new homeowners, but we also know that it’s equally important to support existing homeowners and invest in community priorities. The We Sow We Grow urban farm is a powerful example of what neighbors can do when they work together, and we can’t wait to see how much they continue to grow in the years to come.

Help Habitat Chicago continue to invest in West Pullman by donating today. Want to read more about the We Sow We Grow farm? Visit Natasha's website. 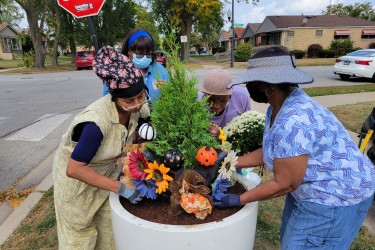 We want you to be proud of the area you live in and our small grants may give you the chance to make improvements that your entire neighborhood can enjoy. You dream up the idea, recruit your neighbors, and we'll fund it. 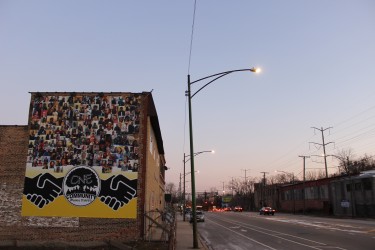 A NEW SEASON OF NEIGHBORHOOD GRANTS

What would you and your neighbors do if you had $500 to work on a project together? What about $1,200? When you look around your neighborhood, what ideas do you have? Landscaping? A resource fair? Our Neighborhood Grants Initiative helps bring those all-star ideas to life.
More Stories
Introducing Habitat Chicago's Race and Housing Series
July 2022
LIFECYCLE OF A RESTORE DONATION
April 2022
EXCEPTIONAL WOMEN BUILDERS
March 2022
HABITAT CHICAGO RECEIVES $2.5 MILLION GIFT FROM MACKENZIE SCOTT
March 2022
IMPACT: ACCOMPLISHMENTS, PRIORITIES, AND GOALS
March 2022