Habitat Chicago homebuyer Tabitha recently completed her interior selection meeting, where she collaborated with Habitat Chicago staff to make customizations to her new home's flooring, cabinets, and countertops. These selections will match the radiant personalities of Tabitha and her daughter, Ayianna, and this selection process encompasses what homeownership means to them: the freedom to make choices.

Before joining Habitat Chicago's Affordable Homeownership Program, Tabitha was forced to move six times for various financial and social reasons beyond her control, having to uproot and readjust her daughter to different neighborhoods and schools. Tabitha believes that her path to affordable homeownership will ensure control over her family’s living situation, a reality that was exhibited in the decisions they made during their interior selection process.

Tabitha and Ayianna both weighed in on the design process during their selections. It means the world to them that they will be able to walk in the door of their home with the knowledge that they designed the space and that it will be a physical representation of who they are as a family, combining Ayianna’s simpler taste with Tabitha’s love for bold and bright colors. Tabitha laughs when she talks about how different their bedrooms will be due to their unique styles.

Tabitha is not only excited about the choices she’s made for her interior design selections, but also about the choice she’s made to move her family to West Pullman. Though she did not know much about the neighborhood before starting her journey to become one of its newest residents, Tabitha has been intentional in learning about her new community and promoting its positive attributes. She's taken time to sit and talk with long-time residents about ‘the good old days’ and why they believe West Pullman has the potential to thrive.

Tabitha sees the physical beauty of the area, with a new bike path and lots of open green space. She also sees the social value of the neighborhood, describing it as “up-and-coming and open to different types of ideals." Tabitha also appreciates the many layers of diversity- in its residents and in its businesses, and she sees the economic opportunity that awaits herself and her fellow neighbors. There are numerous opportunities to rehabilitate existing buildings and to create new enterprises. With years of experience in the restaurant industry, Tabitha hopes to open her own restaurant in the neighborhood one day.

Tabitha sees a lot of her own journey reflected in the history of West Pullman. The area, like herself, has faced hard times. However, West Pullman has all the right building blocks- it has the physical, social, and economic elements needed to succeed as a community and Tabitha is fully embracing her new environment and the role she hopes to play in its future success. She recognizes what can happen when people stay open-minded and become meaningful contributors to their community, and Tabitha believes that she and her neighbors can begin a ripple effect: “the momentum of seeing others moving in a positive direction, interacting with each other, benefiting themselves and doing what it takes to improve their situations... more people will jump on that bandwagon.”

Reaching this stage of her home buying process makes Tabitha feel like "everything is finally coming together" for her and Ayianna. It means much more than simply picking out finishes and interiors; it represents the freedom of choice that comes with becoming a homeowner; and it represents the bright future she has chosen to build for her family in the West Pullman community. 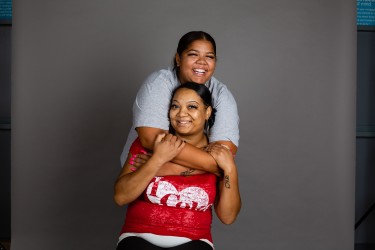 Tabitha is a dynamic woman determined to give her 18-year-old daughter, Ayianna, every opportunity for growth and success she can. She is ecstatically proud to add “homebuyer” as one of her attributes. 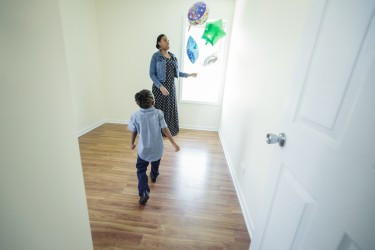 Back to School: Children and the Benefits of a Good Home

Investing in affordable, quality housing is investing in kids and their futures. Studies have shown time and time again that a safe and stable household significantly impacts school outcomes for children. However, with 10% of the Chicago population currently facing critical housing needs, families...
More Stories
HOUSING AND HEALTH DURING COVID-19
June 2020
WE STAND WITH THE BLACK COMMUNITY.
June 2020
PROGRESS AMID THE PANDEMIC
May 2020
HOW TO MAKE A FACE MASK
May 2020
RESILIENCY
May 2020