We are proud to support and champion the work of other organizations in West Pullman that are working to improve the quality of life, commercial viability and human connectivity of the community.

INVEST South/West: West Pullman is included in one of the 10 priority communities selected as a part of the INVEST South/West commercial corridor improvement strategy. Launched in October 2019, the goal of this city initiative is to re-activate neighborhood corridors that have historically served as focal points for pedestrian activity, shopping, services, transportation, public spaces and quality-of life amenities for local residents. Near West Pullman, the priority corridors include South Michigan Avenue and 111th Streets.

The 119th Corridor Plan: The 119th Street Corridor stretches four blocks north and south of 119th Street (from I-57 to Union Avenue). The vision of the 119th Street Corridor is to attract jobs, industry and resources in order to create a vital economic area on the Far South Side of Chicago and support the diverse residential neighborhoods in the surrounding community. Habitat Chicago is proud to be a partner in this plan, spearheaded by Far South Community Development Corporation.

The Salvation Army Kroc Community Center: The Kroc Center in West Pullman is the largest community center in Illinois and the largest Kroc Center in the continental U.S. It provides an extensive and affordable amount of programs for the community and has quickly become a daily destination for many South Side residents since opening in 2012.

Blue Door Neighborhood Center: Run by Blue Cross and Blue Shield of Illinois, this neighborhood center in Pullman is committed to transforming the health of individuals, families and communities. In addition to free wellness classes and workshops, the center connects community members with Health Educators as well as additional resources and services.

One Eleven Food Hall: In 2019, the first food hall in Pullman opened its doors. The One Eleven Food Hall project brings South Side food businesses into a larger market and harnesses the resources of a single shared space. Spearheaded by Chicago Neighborhood Initiatives, this project is designed to support emerging entrepreneurs and act as a bridge for local businesses wanting to open or expand their operations.

Chicago Neighborhood Initiatives: Chicago Neighborhood Initiatives was formed in 2010 to coordinate resources and economic development in Chicagoland’s low-to-moderate income neighborhoods. Through real estate development, the cultivation of high impact opportunities for entrepreneurs, and long term partnerships, this organization seeks to revitalize neighborhoods and create jobs. In nearby Pullman, CNI has worked on projects such as the Method Soap Plant, the Pullman Artspace Lofts, the 111th Street Gateway Retail Center, and the Amazon Fulfillment Center, among others. 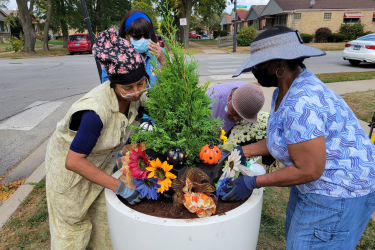 West Pullman is a tightly knit community with many assets that make it a valuable place to live for its proud residents.

Improving the quality of life for a community can’t be done alone and so we strive to find good partners and be a good partner in return.