The air was crisp and full of energy on December 3rd, as the West Pullman community kicked off its 4th Annual Tree Lighting Ceremony. Nearly 100 West Pullman residents gathered at Sts. Peter and Paul church under the theme of this year’s event: Humility, Peace, and Justice.

Walking into the church’s social hall, attendees were welcomed with a blast of warm air and the smell of turkey. The kids’ table hosted a variety of crafts that drew in the young and old alike, and Santa made his rounds with an oversized bowl of Christmas candies.

The first event of the evening was an energy efficiency workshop, which covered topics related to home weatherization, particularly fitting given the nearly freezing temperatures outside. Shortly after the workshop ended, the tree lighting began.

As people moved outside to the tree, laughter, conversation, and cheers filled the air. The excitement grew as the countdown began, culminating in a soft explosion of multi-colored light. The glow coming off the tree spread throughout the air, warming those congregated around its light.

“This year’s tree lighting ceremony had a spirit to it that couldn’t be denied. There was a sense of camaraderie, community, and family that lifted everyone up,” said Shirley Holden, one of the lead organizers of the event. “I can’t wait to build on this and make the event even more accessible to the community in years to come.”

After the lighting of the tree, everyone returned inside where the food was served and the St. Anthony’s Folklorico dancers performed. At the end of the night, Holden awarded Cyndi Stewart the Humility, Peace, and Justice award for her engagement and stewardship in the community.

This annual tree lighting ceremony is a growing tradition that provides the space and opportunity for community members in West Pullman to cultivate connections, relationships, and a shared identity. Eight different West Pullman churches were present during the night as well as several community activists that included potential aldermanic candidates, education advocates, and health care providers.

This year’s tree lighting carries forth the tradition set in place four years ago by the West Pullman Community Action Group, a group of West Pullman residents committed to their community’s continual growth, formed in partnership with Habitat Chicago. Part of the group’s mission is to engage the community in collaborative activities that connect and mobilize residents, and this annual event does exactly that.

Holden, one of the founding members of the Community Action Group, pushed for the first West Pullman Tree Lighting Ceremony. This year, Holden once again took the lead on the event, and the results were encouraging: the vibrancy and resiliency of the West Pullman community permeated throughout the night. "There is so much cheer and fellowship in this room tonight, and we must continue to share it with our larger community," reflected Holden during the ceremony.

The tree lighting tradition, while young, is strong, and when the night is over, the impact of the event will remain within the relationships and memories created. For Holden, “the work is just beginning.” 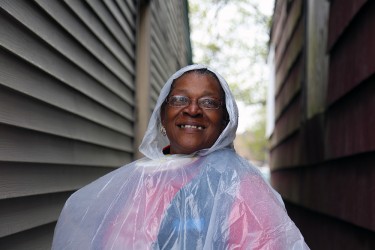 West Pullman is a tightly knit community with many assets that make it a valuable place to live for its proud residents.
More Stories
NOW RECRUITING: WOMEN BUILD 2021 TEAM LEADERS
April 2021
VOLUNTEER SCAVENGER HUNT CHALLENGE!
April 2021
HOMEBUYER UNIVERSITY: MEET OUR INSTRUCTORS
January 2021
FINDING THE LIGHT IN 2020
January 2021
BLOOMING WHERE WE ARE PLANTED
November 2020